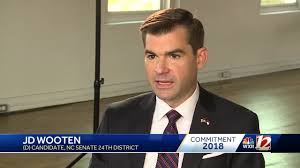 Greensboro, NC - JD Wooten faces intense scrutiny for using the VA Home Loan program for buying a house he then rented even though the rules of the VA Program clearly state that he should live in the home for a year instead of turning it around as a rental property. However, this scandal only deepened after WXII reported that JD Wooten rented his house to a drug dealer. If this is not bad enough, an examination of Wooten’s required disclosures indicated that, for some reason, he forgot to list the required income from the convicted drug dealer. Apparently, Wooten is embarrassed about renting his property to a convicted drug dealer, so he neglected to disclose this income on his required ethics disclosures. This glaring omission caused a veteran ethics professional to file a complaint with the Ethics Commission, possibly resulting in even more legal problems for Wooten.

“These recent reports from local media raise more questions that require immediate answers.  Why did J.D. Wooten fail to disclose rental income on his ethics form, some of which was coming from a known drug dealer? Were these cash payments? Were they properly documented,” said Chairwoman Tina Forsberg GOP 6th District.  “Can the voters of Guilford and Alamance Counties trust a State Senator who files a false ethics form and rents property to known drug dealers?”

Wooten faces Republican Amy Galey in the race for Senate 24. Galey is an attorney and chair of the Alamance Board of County Commissioners.

Join the fight to keep Republicans elected in Congressional District 6

Support your NC Congressional District Republican Party in their mission to keep the state RED.